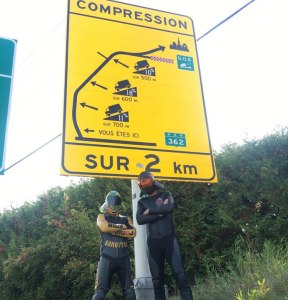 Gravity racing is just a grown-up version of soapbox racing. More about speed and less about fun. The fastest  G racing event in the world is called L’Ultime Descent, and is based in Les Éboulements in the Charlevoix region of Quebec, Canada. It features the steepest, smoothest and longest section of road in the world, and so until someone finds something better, it’s the place that the current records have been set.

The event attracts G racers from all disciplines – street luge, skateboards, inline skates and of course gravity cars and bikes. The last event in September 2017 was where Doug Anderson set the new WGSA (World Gravity Speed Association) world record of 101.98mph in his Bodrodz Atomic Scalpel.

The next L’Ultime Descent is touted to take place in September 2019.

Our goal is to win the event and set the new world record.

How are we going to do this? First, read about our team.

Here are the L’Ultime Descent promo videos for 2016 and 2017, along with an in-car video of “Fast” Donnie Schoettler’s 99mph run – a video that really shows the speed and acceleration that is achieved. I recommend turning down the lights and cranking up the volume and watching all three. This is what it’s all about.